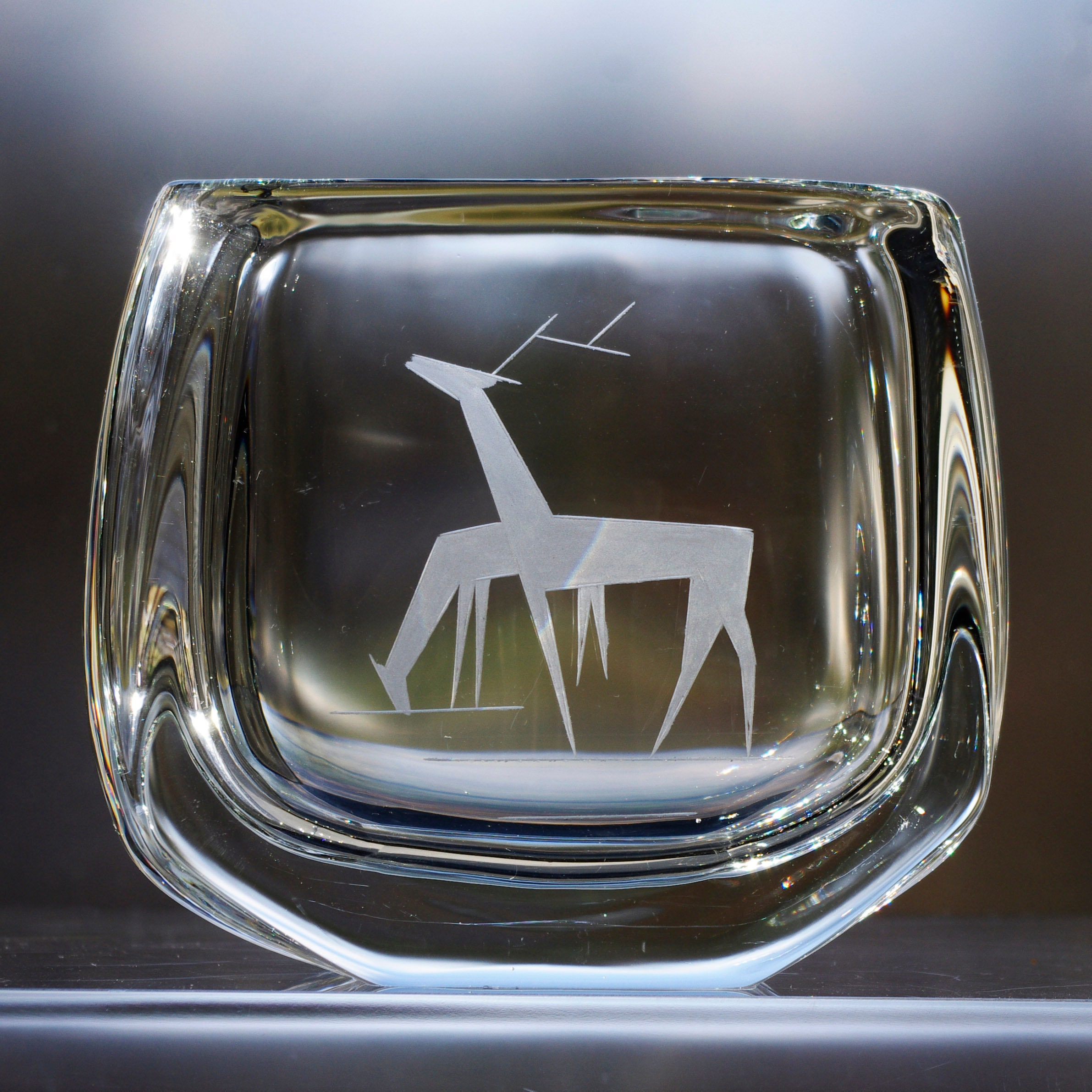 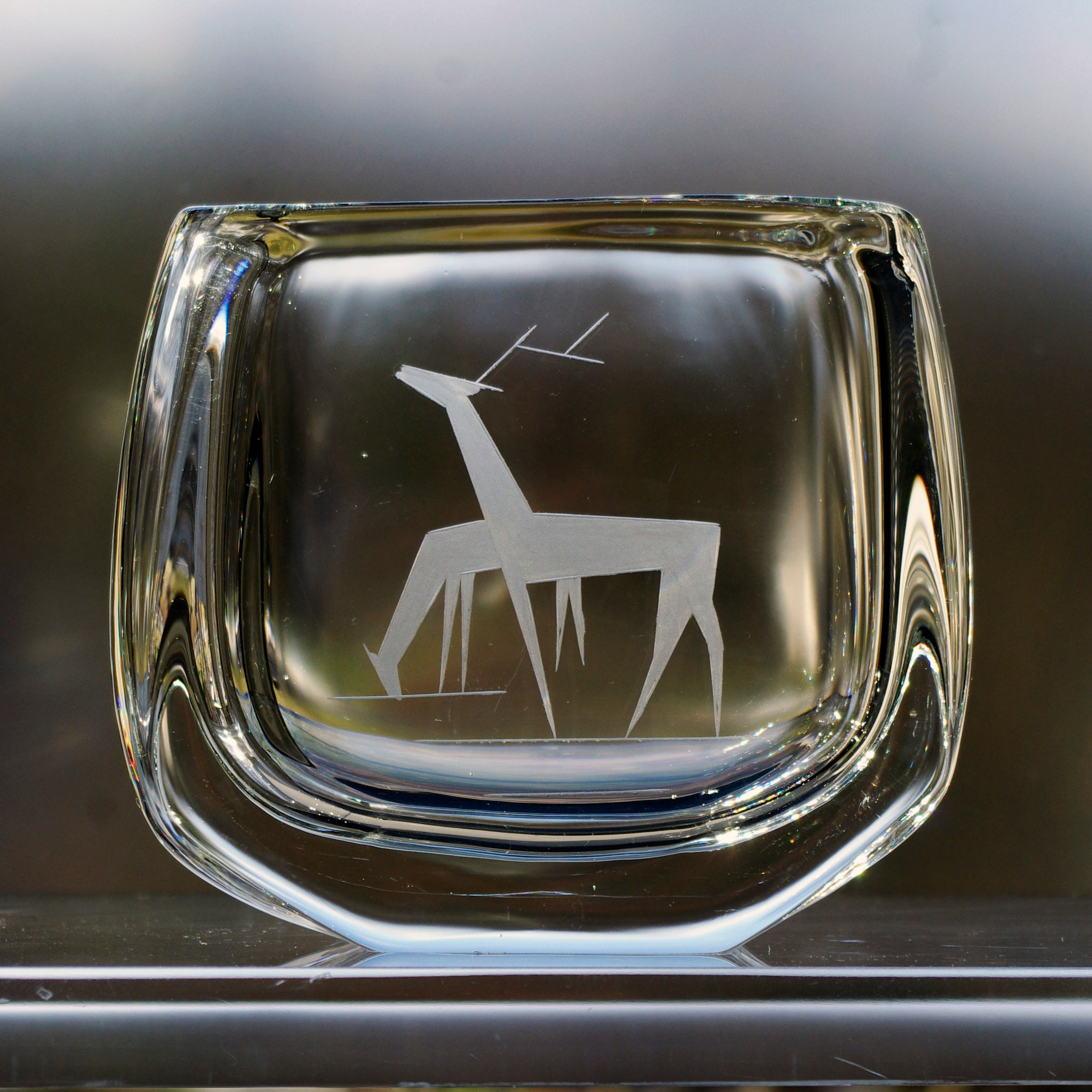 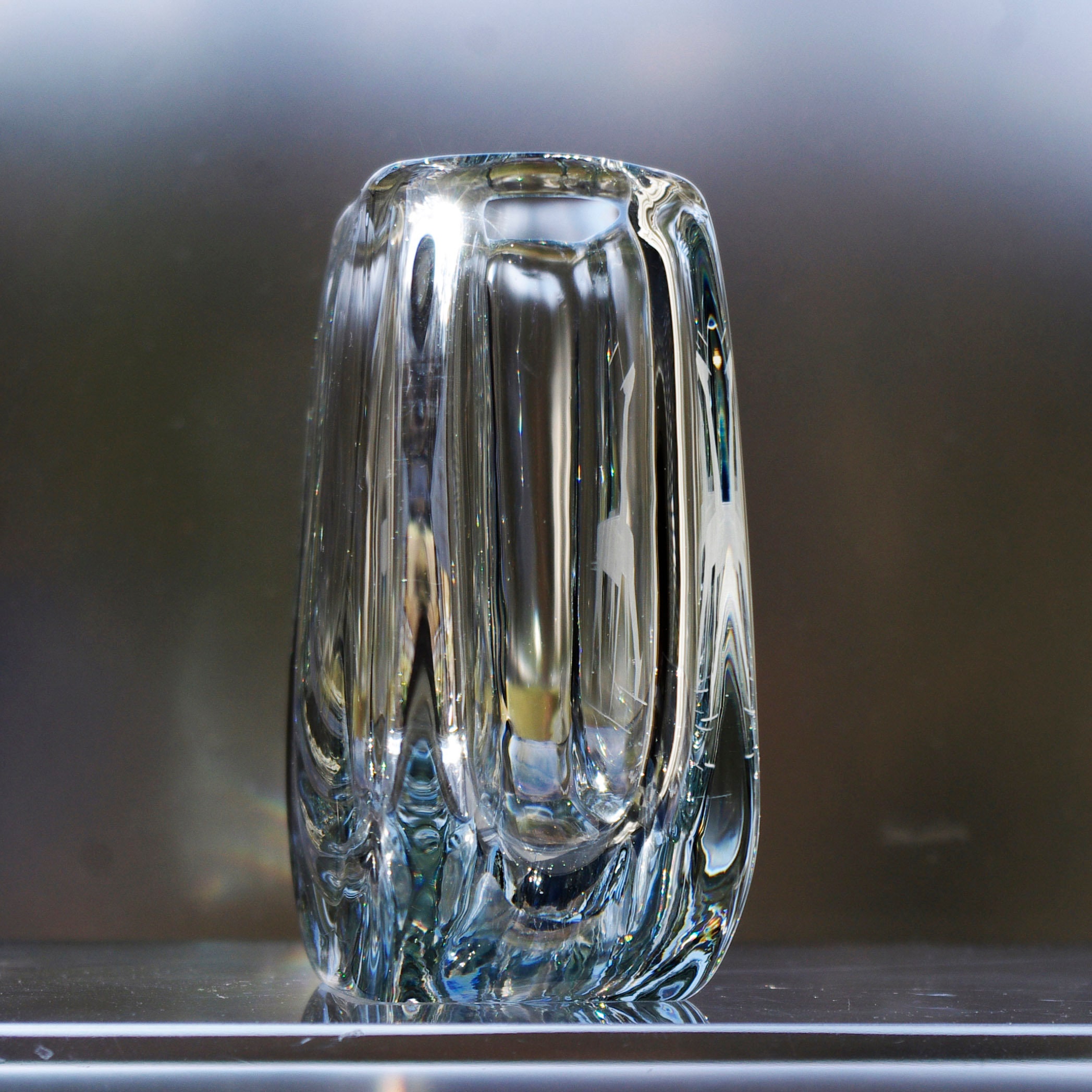 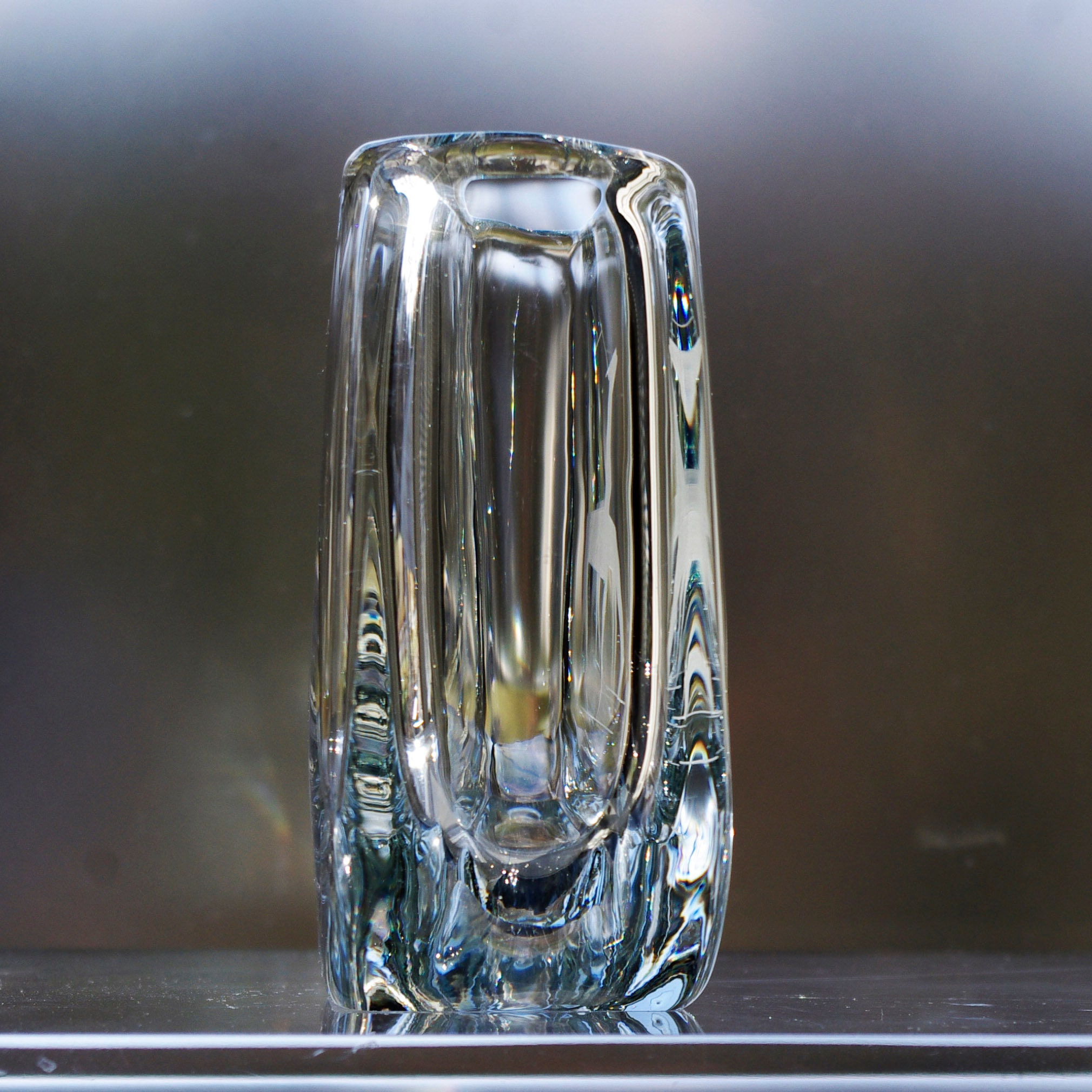 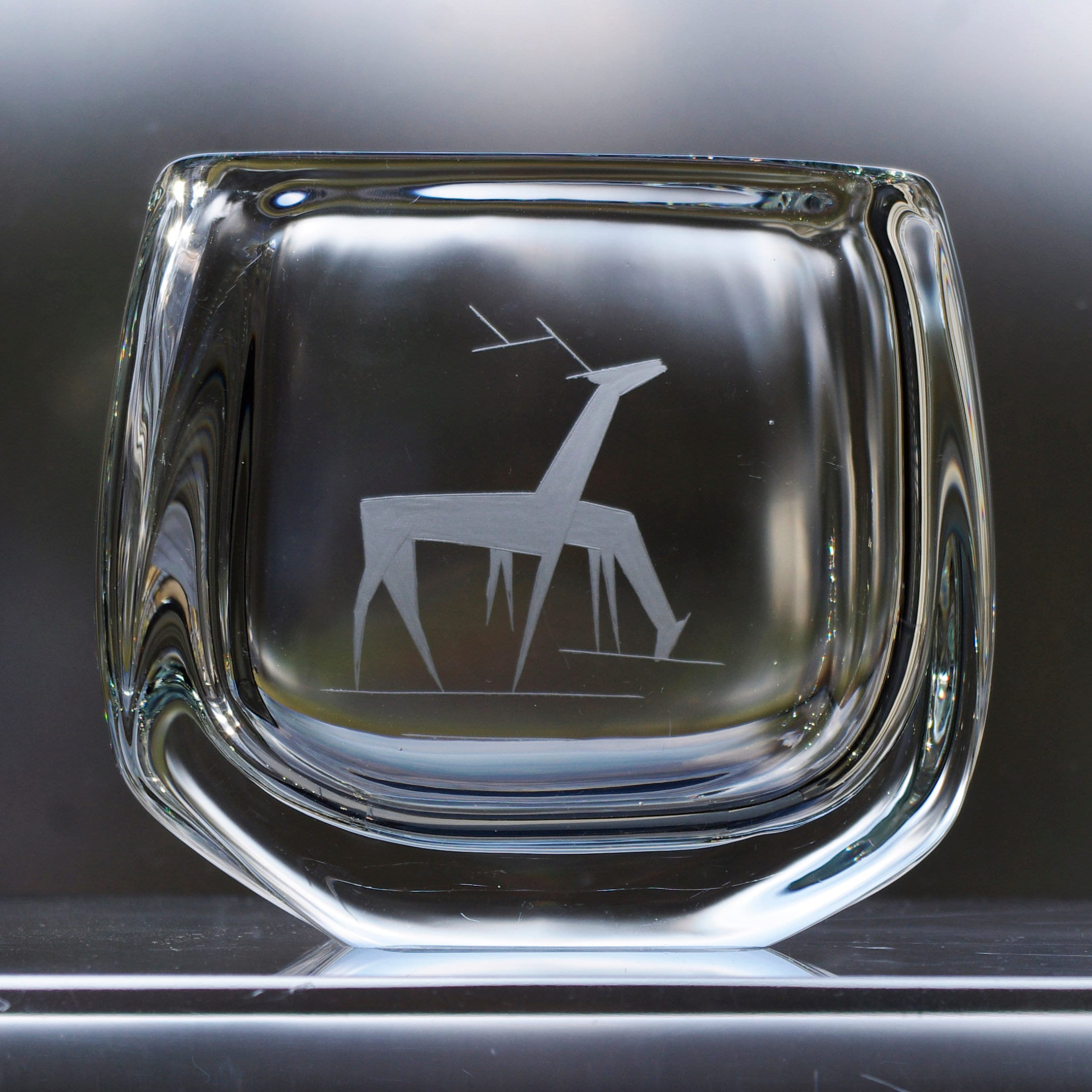 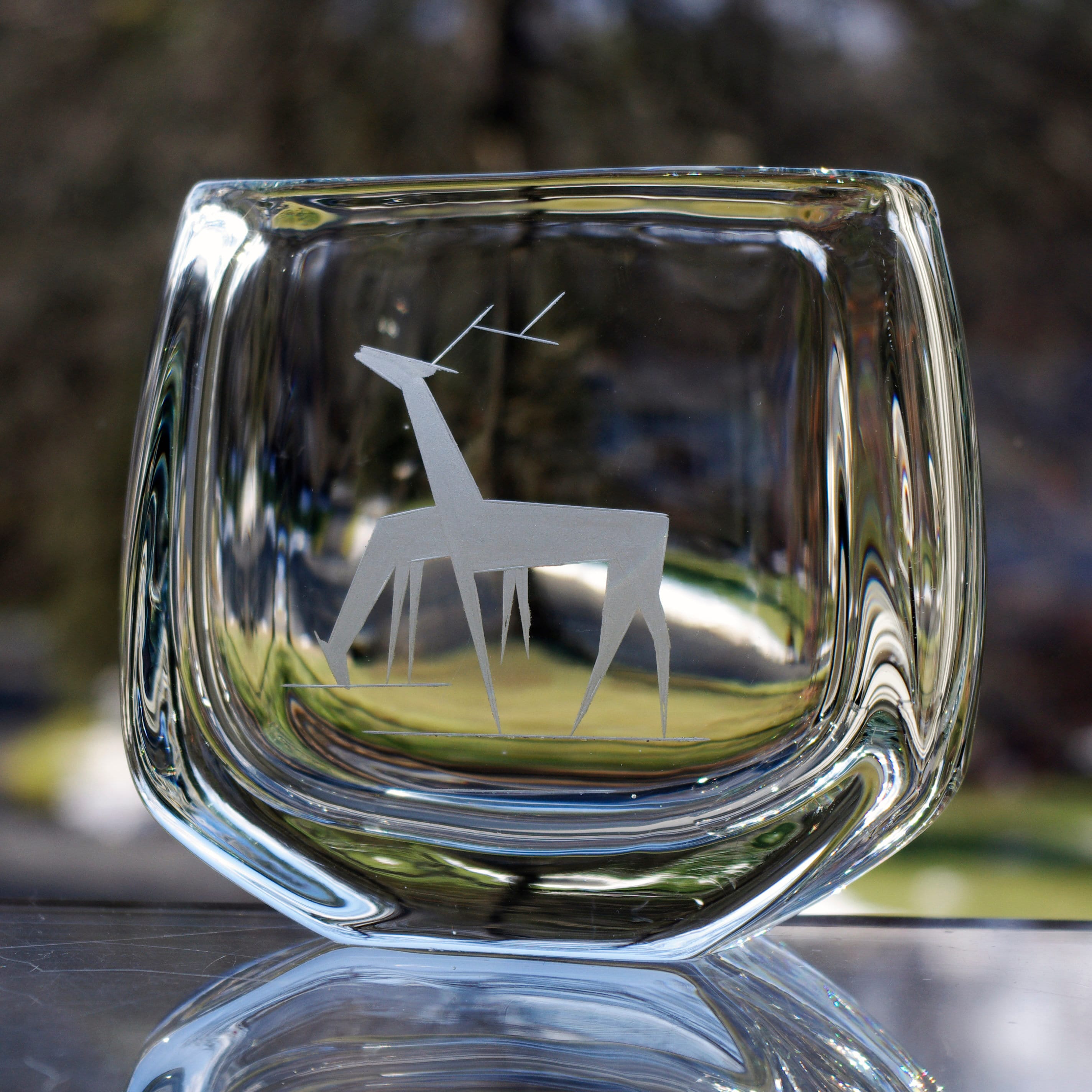 This unsigned glass vase is most likely a Bengt Edenfalk design for Kosta Boda or Royal Krona. The stylized, strikingly-angular deer are copper-wheel engraved and framed beautifully by the curvy lines of the vase. The hand-blown crystal is perfectly clear and it sparkles in the sunshine - very pretty. Edenfalk's whimsy and economy of design make his work very appealing to me. The vase is a medium size, about 6" x 3" x 5" and weighs 1.5 pounds.

Bengt Edenfalk (1924-2016) started his career as an intern to Edvard Hald at Orrefors Glasbruk in 1945. Two years later, he began his studies at Konstfack, graduating in 1952. In the same year, he was employed at Skrufs glassworks as art designer, a job he held until 1978. Edenfalk designed hundreds of glass objects: suites of glassware, vases, candlesticks, and bowls of various sizes and artistic expressions. The period at Skruf ended in 1978, when Edenfalk went to work for Kosta Glasbruk. After retiring in 1989, he worked occasionally with several small glass shops to design exhibition glass.

Among the public artworks bearing Edenfalk’s name is a 142-meter long glass wall in the T-Centralen, created when he and Erland Melanton won a competition for decorating the new subway in Stockholm in 1957. Several large mosaic walls were added in the 1960s and 1970s. Edenfalk is represented at several major museums in Sweden and abroad and had a large number of exhibitions in Sweden, Norway, Denmark, England, France, Germany, Italy, Germany, USA.

In the 1970s and 1980s, Edenfalk was deeply involved in the Swedish Pony Association. Not only at the local riding club in Eriksmåla, but also as a runway builder at the national level. Bengt Edenfalk lived in Laholm from 1987 until his death in 2016, where he painted watercolors and played croquet and was very satisfied with his life.