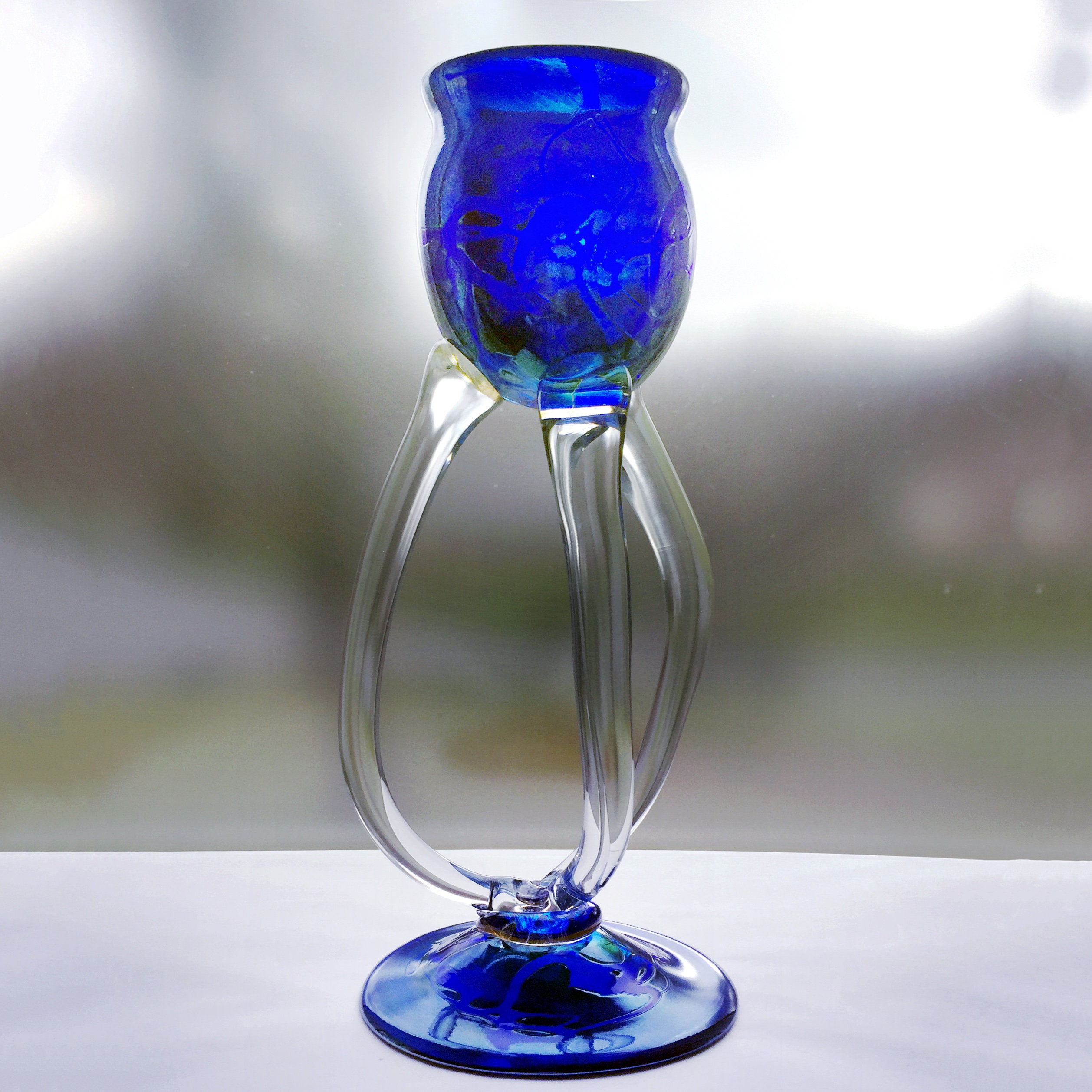 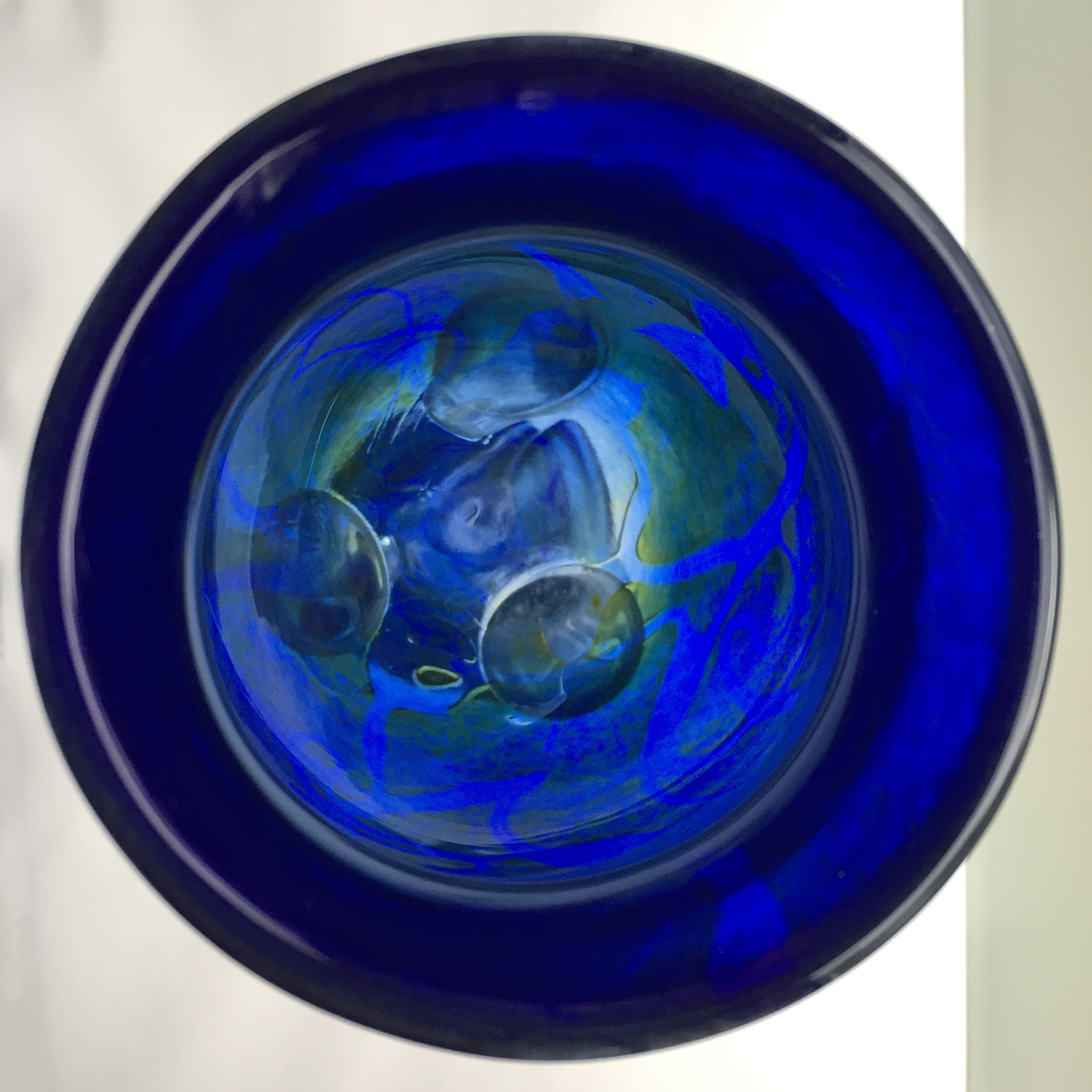 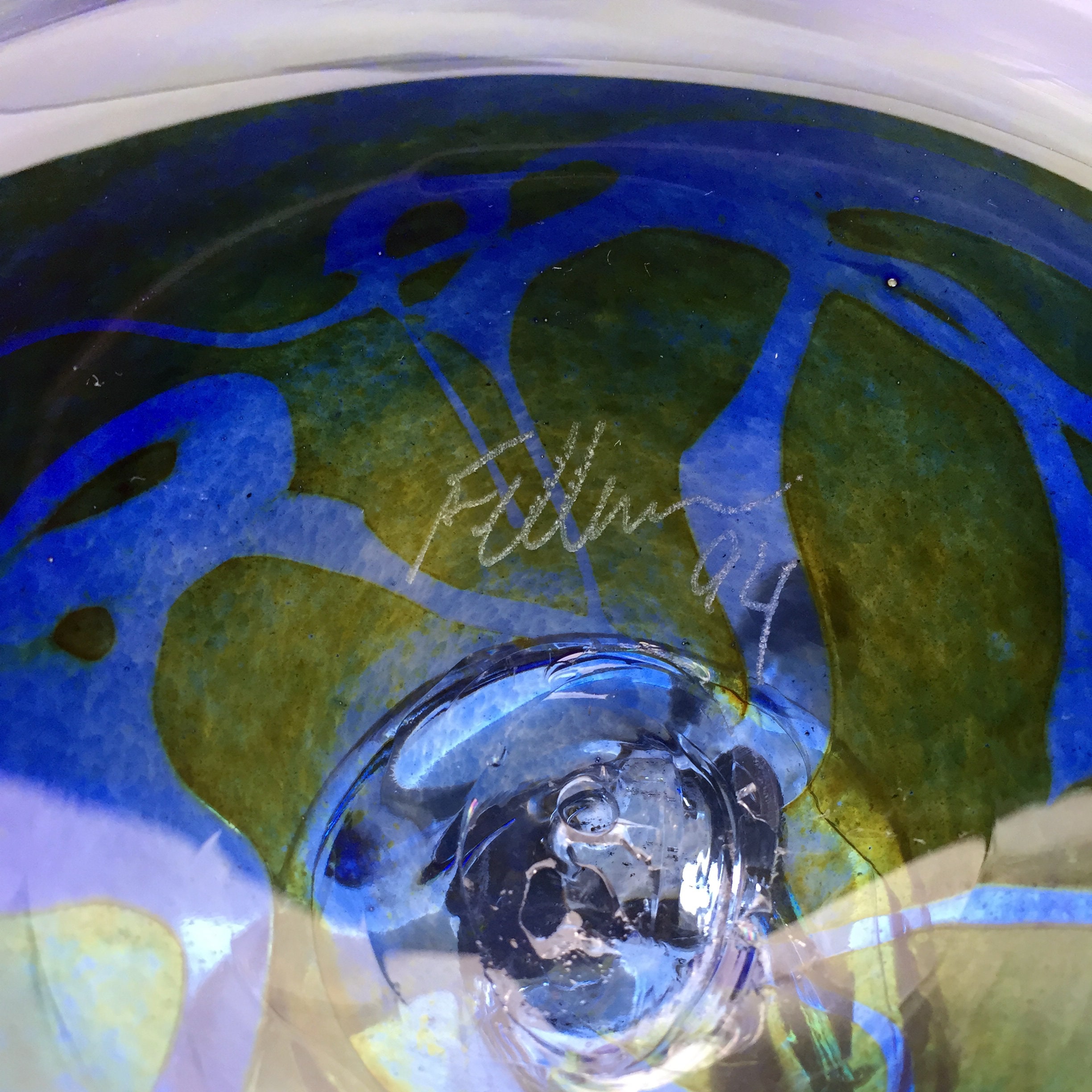 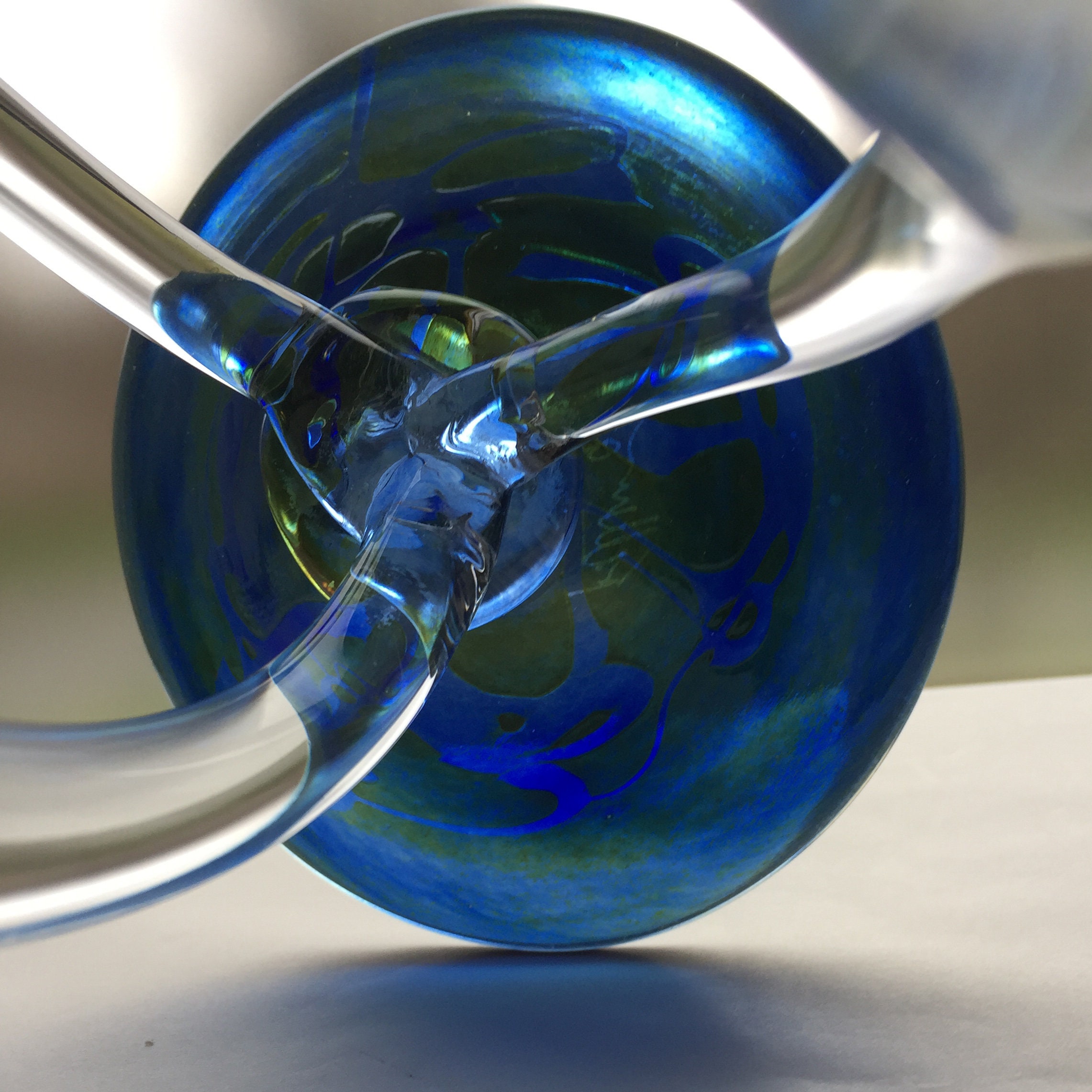 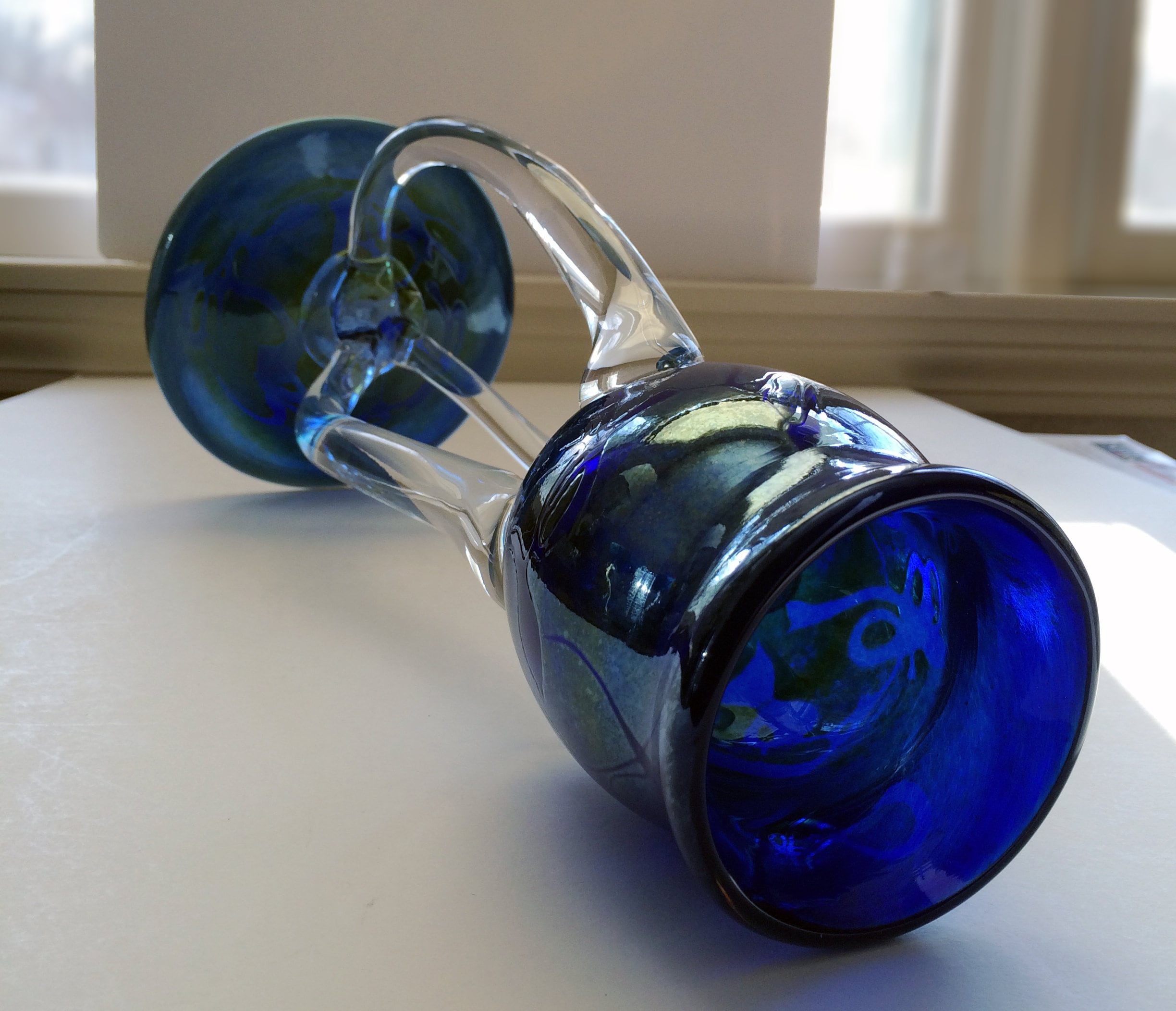 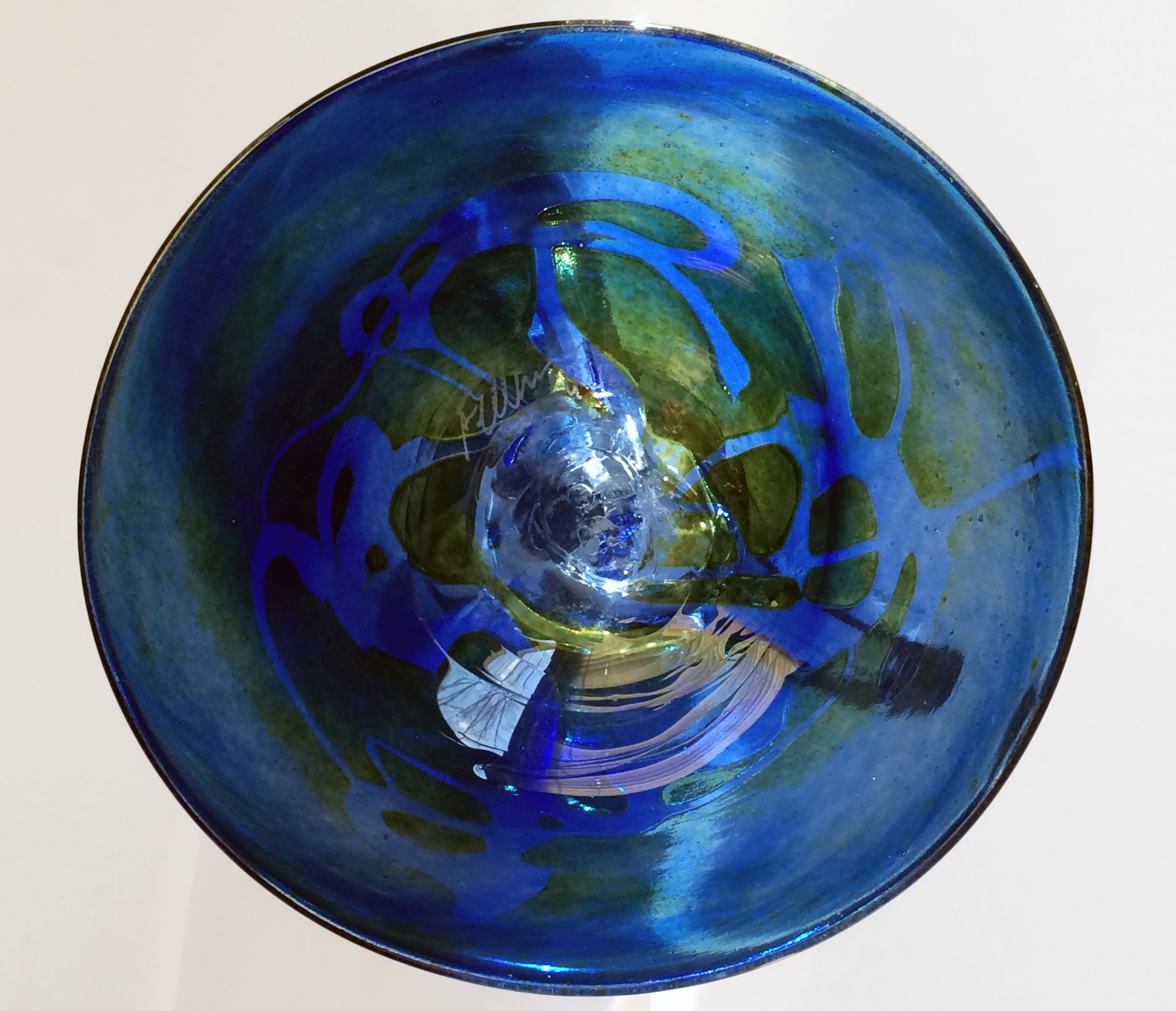 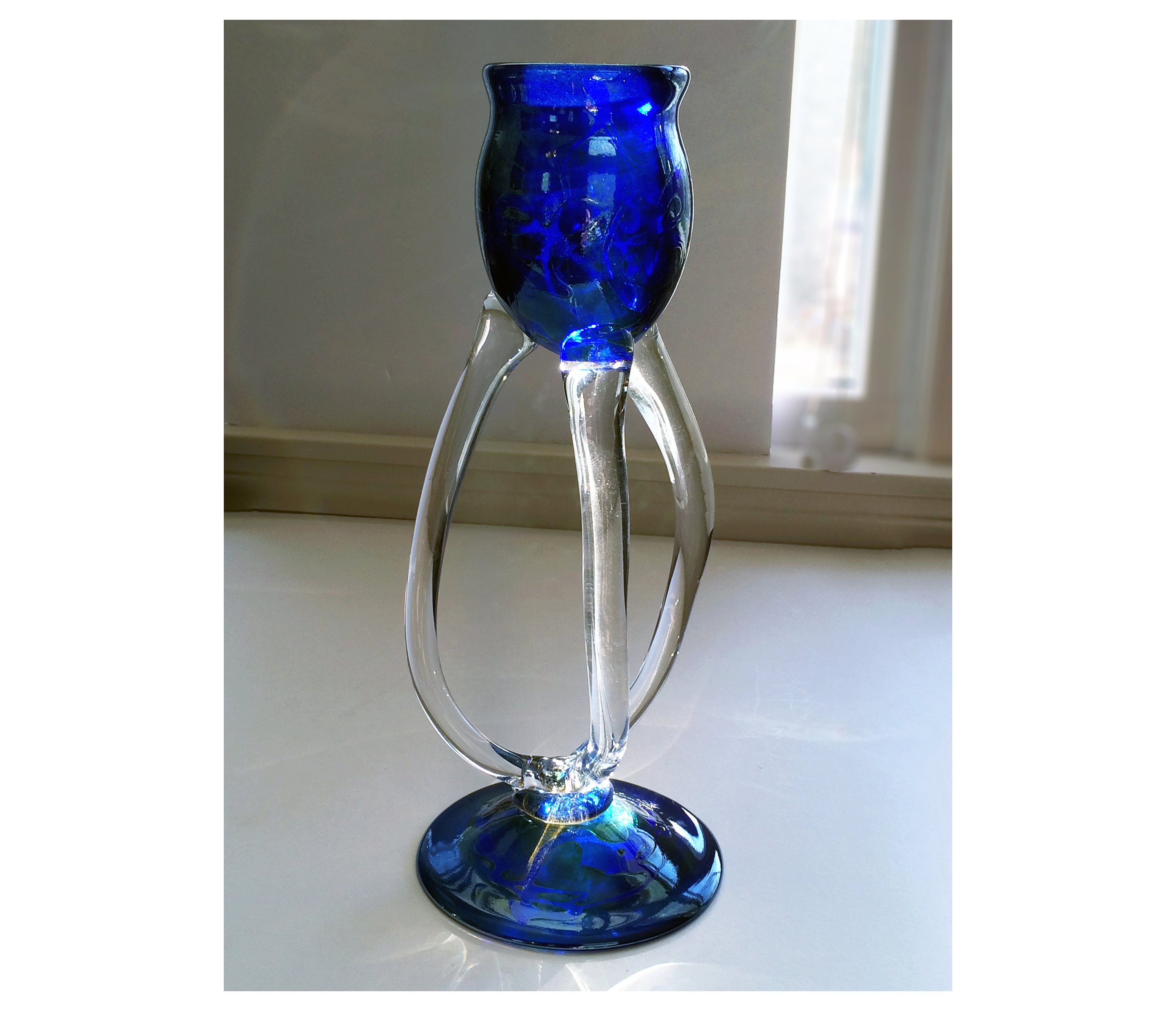 This is an incredible, one-of-a-kind work of art. As you see in the photos, this hand blown piece sparkles in the sunshine. The former owner used it as a tealight holder, but I have had it on my shelf simply as an object d'art. It reminds me of our planet, a blue and green jewel in space. The overall height is 12.5" and it weighs 2 pounds, 2 ounces, unpacked. I have had it in my home for several years, having bought it, along with a wonderful group of Fellerman Raabe glass from the estate sale of a local collector.

The artist:
Stephen Fellerman grew up in New York and enrolled in college at Pratt where he took a ceramics class and experienced for the first time working with his hands. Upon graduation, he wanted to realize a childhood dream to go to California, and in the summer of 1972 bought a VW microbus and headed west. Stephen arrived in Sausalito to discover one of the most creative art centers in the country. Hanging out at a small glass studio (one of the few at the time), he watched others and absorbed a variety of techniques, then experimented during his allotted time. His first memorable piece was a little asymmetrical vase with a pushed in lip and gradated color.

After a year in California, he returned east to Kent, Connecticut to open his own studio, becoming one of the first studio glass artists to make a living from glassblowing. At the time, there were no craft shows or galleries exhibiting this type of work. But 1975 saw the advent of the American Crafts Council which held its first show in Rhinebeck New York. 400 exhibitors - and only three of us were glass blowers," Stephen recalled. He quickly began to build a clientele. Responding to a style resurgence, Stephen specialized in Art Nouveau inspired pieces, and his reputation grew. By the early 80s, with increasingly more artisans blowing glass, he began to branch out into more personal and original work. He had a passion for the process, and spent years refining its expression to "push the envelope" of his medium. "Over time I fill up my bag with tricks and techniques and eventually I take the techniques and start to express myself, instead of just doing the techniques I learned." It requires a great amount of spontaneity which he has learned to embrace, acknowledging that when he takes a risk, it always pays off. "